Learn about different kinds of Glue and which to choose for your creative projects. See how to create reference pages in your journal. Then, let’s Get Creative and make clay, faux metal and resists on paper and fabric – all with glue!

Glues are actually part of the family known as adhesives. (Note: Although the term Glue refers to something made from organic substances and Adhesive refers to substances that are chemical-based, I use the terms interchangeably.) Ancient tribes found that parts of animals could be processed to yield collagen which was sticky and good for holding things together. Many other organic items like milk solids, blood albumin, fish parts and plants were also eventually used to create various kind of glues.

Glues have been incorporated into artistic expression for a long time! Some of the earliest evidence of glue being used in art is found in cave paintings in Lascaux, France. Apparently, those early cave artists wanted something to help retain colors and resist moisture in cave walls. It worked because they are still apparent today!

Egyptian tomb artifacts that used glue for veneer and inlay have been dated as far back as 3000 B.C. Artists from Greece and Rome used glue to create mosaic floors and tiled walls which, after thousands of years, are still in tact!

During the 1930s, adhesives grew by leaps and bounds with developments in the chemical and plastic industries. It wasn’t until the 1940s and 50s, however, that adhesives were commercially available.

Elmer’s introduced their first white glue in 1947. It was called Casco Glue which soon became Elmer’s Glue-All. Did you ever wonder where the name “Elmer” originated? Well, he is the husband of the Borden company’s spokescow, Elsie! In the early years, both appeared in many print ads for Borden dairy products. Eventually Elmer became the face used for glue products while Elsie took care of showcasing dairy items.

In 1960, the Elmer’s company designed the first PVA glue designed especially for woodworkers. School glue with the orange cap was introduced in 1967 and became a classroom staple, followed in 2007 by Elmer’s No-Run School Glue.

That’s just the tip of the iceberg about glues and adhesives! In the video class I’ll show you many different sticky substances and examples. Then we’ll Get Creative! 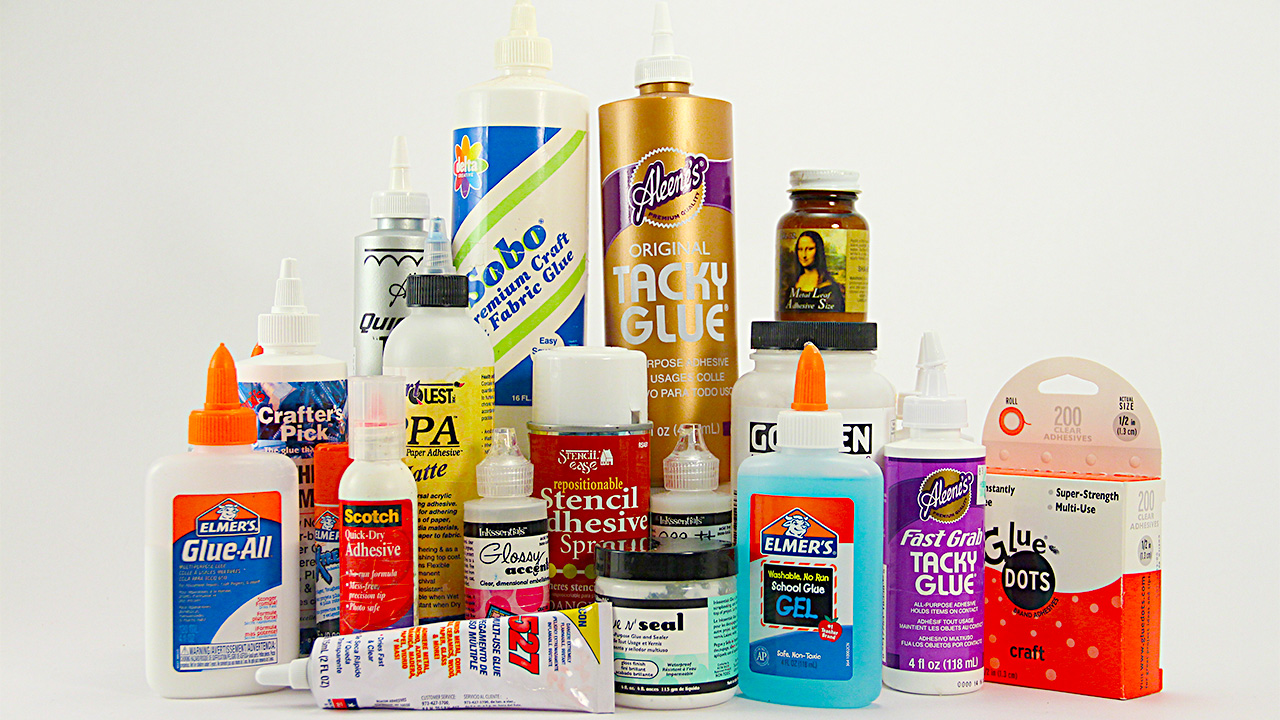